A comprehensive examination of Russian art of the 1990s has been overdue. The Kraftemessen project was created to compensate this. The curators, Margarita Tupitsyn, Boris Groys and Victor Misiano, provide three different interpretations of post-Soviet visual culture. The list of the people involved in the realization of this project includes — among others — Haralampi G. Oroschakoff (the concept), Johanna zu Eltz (the project co-ordinator), and Diana von Hohenthal (of Hohenthal and Littler Gallery in Munich). Oroschakoff also curated the show at the Academie der Bildenden Kunste, where viewers became acquainted with the works of Ivan Chuikov, Nikita Alekseev, Konstantin Zvezdochetov and Andrei Filippov. The parallel program featured symposia at Kunstverein, the musical performance (a collaboration between Dmitry Prigov and Vladimir Tarasov), the “Night of Russian Lyric” at Literaturhandlung Rachel Salamander (with Dmitry Prigov, Lev Rubinstein and Vladimir Sorokin).

The first show, “Damaged Utopia,” included artworks and installations by Vitaly Komar and Alexander Melamid, Leonid Sokov, Oleg Vassiliev, Igor Makarevich and Elena Elagina, the Peppers (Ludmila Skripkina and Oleg Petrenko), Vladislav Mamyschev-Monroe and Andrei Roiter. The show aimed at a deconstructive reading of the narratives of twentieth-century Soviet art. “Damaged Utopia” also had an eschatological dimension; the entire event was comparable to a brilliantly staged funeral. The curator used the indispensable tools of distancing and nostalgia to communicate her message — farewell to the Utopian.

Curiously, the German television coverage of “Damaged Utopia” chose not to touch upon iconography which — in one way or another — referred to the German past. Among the exclusions were political symbols of the 1930s, ironically appropriated by the Peppers and by Makarevich and Elagina. Their installations were separated by a concrete wall, as if the artists wanted to prevent “eye-contact” between the grotesque representation of Hitler and the replica of the notorious German eagle which is holding — instead of a swastika — a golden key “stolen” from the door to the Stalinist Utopia. The show’s participants, for whom the Nazi eagle and Hitler are manifestations of evil, can hardly be mistaken for skinheads. Therefore, the media’s avoidance of this imagery is a clear case of unnecessary censorship. At the same time, the television camera dwelt upon the images of Lenin and Stalin, taking them in close-up. This inconsistency suggests that by focusing on Soviet totalitarian iconography, the Germans were attempting to patch the void in their own Unconscious. Sometimes, we cure ourselves, while pretending that we take care of someone else. The fact that Russian art still manages to remain a magnet for the (“suspiciously” interested) German audience literalizes Jacques Lacan’s notorious conception of the unconscious as the “discourse of the other” (read: Soviet and post-Soviet socio-cultural practices). 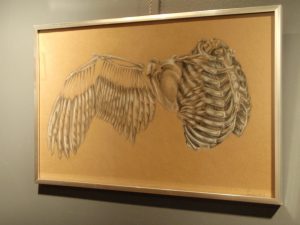 Komar and Melamid’s minimalist “re-erection” of Lenin’s Mausoleum with its clear references to Constructivism made the viewer believe that Modernism and Socialist Realism (or Avant-Garde and Kitsch, in Clement Greenberg’s terminology) are exhausted enough to unite peacefully. Leonid Sokov’s theatrical installation, a crowd of small replicas of Modernist sculptural icons, was placed next to the Jovian figure of Stalin who, in a conciliatory mood, confronted them rather joyfully. In Sokov’s opinion, this “reconciliation” signals the death of the Utopian on both sides of the barricades. Like Komar and Melamid, he seems to ask whether the Soviet cultural archive, as seen through the eyes of the alternative intelligentsia, will be incorporated into the history of Western art.

Perhaps, the most striking aspects of “Damaged Utopia” unfolded in the photographic section. Here, images of the 1920s and 1930s were in collision with snapshots taken by contemporary photographers. The purpose of this project was to juxtapose the rhetoric of anticipation (peculiar to the Soviet mass media of the 1930s) with the current tendency to present evidence of unfulfilled anticipation. Some of the pictures were taken in the 1980s and 90s by alternative photographers such as Boris Mikhailov, Valery Schekoldin, Sergei Volkov, Sergei Borisov and Igor Makarevich. Their contribution to “Damaged Utopia” consisted of “non-affirmative” images examined vis-a-vis the “affirmative” photography endorsed by the State in the 1930s. The recent photographs themes range from damaged infrastructure to crowds of exhausted and depressed people, accentuating the phenomenon of decaying utopia. This unfolding is accompanied by an attempt (on the part of the artists) to rediscover the gloomy and non-heroic past buried under the mythological layers of the official (paradisiacal) representation. The question is: can our lost and falsified past be re-captured or is it just another dream, seen backwards?

Other Kraftemessen exhibitions — specifically, “Privatization,” curated by Groys, and the show at the Academie der Bildenden Kunste, aimed at totally different goals. Unlike “Damaged Utopia,” they insisted on a communal perception of reality, thereby resisting the possibility of a fragmented, distanced or critical treatment of the status quo. Whereas “Damaged Utopia” seemed to thrive on negativity, “Privatization” was driven by the forces of the Affirmative. Among the highlights of “Privatization” are Van Gogh’s letters rendered into the language for the blind. These have been lined up by Yury Albert on the walls of Kunstlerwerkstatt beside Medical Hermeneutics’ nocturnal installation with spot-lit chess pieces, and Olga Chernyshova’s black boxes that contained small openings to allow hands to knead the dough inside. All these metaphors suggest that the Privatizers’ epistemological arsenal is consciously reduced to the sensation of touch (the best verification for those who wander in the dark with closed eyes).

In his presentation at the symposium at the Munich Kunstverein, Groys argued that the cultural memory in Russia has (miraculously) disappeared. If it were the case, such a Baudrillardian “revelation” would hint at the Privatizers’ refusal to deal with the past combined with the denial of the unpleasant reality. The “politics of amnesia” is precisely what Groys seeks to protect and aestheticize. This escapist and melancholic utopianism or, rather, utopianism in miniature, as advocated by the “Privatization” group (consisting of Vadim Zakharov, Yury Albert, Olga Chernyshova, Anton Olshvang, Vladimir Sorokin, Andrei Monastyrsky, and Medical Hermeneutics) has lately been targeted by Victor Misiano’s “gang.” His show, “Conjugation,” looked like an apocalyptic site in a deserted amusement park: burnt wooden stairs and constructions, overturned barrels with oranges spilling out of them, a jungle of loose wires that provided unexpected light effects, video projections of a soccer-ball, the roars of hairdryers and vacuum cleaners (as the latter were sucking intimate photographs), and finally — no labels with the artists’ names near the work. This absence clearly signified the return of the anonymous, i.e., the mode of cultural production in which the curator assumes the position of the ultimate author. Needless to say, the authoritarian state played a similar role before Perestroiks. “Conjugation” featured Dmitry Gutoff, Vadim Fishkin, Gia Rigvava, Jury Leiderman, Anatoly Osmolovsky, and Alexander Brener, whose activities can be characterized as a crusade against intellectualism. To attack the neoconceptualists, Osmolovsky and Brener employ a variety of weapons ranging from heavy-duty rhetoric through exhibitionism to masturbation in public places. Taken simply, these gestures manifest the return of negativity which had been abandoned by the Groys’ “privatizers.” Taken seriously, the gestures appear to be career oriented as they lack what Mikhail Bakhtin, in the early 1920s, called “answerability” and “responsibility.”

Kraftemessen’s issues can be criticized endlessly, although visually it was rather strong. However dissimilar or “unrelated” to one another, “Damaged Utopia,” “Privatization” and “Conjugation” seem fairly to represent all the pivotal forces in Russian art today.