This installation by Genevieve Cadieux brought to mind an observation made by Margaret Atwood in her classic study of Canadian literature, Survival. She wrote that Canadian poets, particularly poets writing in French in Quebec, seem acutely interested in “what goes on inside the coffin.” Inside Cadieux’s twelve-foot-long trapezoid-sided glass sarcophagus, entitled Broken Memory, was nothing but empty space, and on the floor, tangles of electrical wiring leading to sound speakers enclosed at each end of the structure. From these speakers emanated cries of female distress that were both horrifying and mesmerizing. At times these moans were one register away from sexual ecstasy, at others so evocative of a woman being tortured as to become unbearable. On leaving the room and this compelling and unrelenting soundtrack, the spectator was susceptible to the same feelings of impotence and despair one has when turning the page of a magazine and thereby “abandoning” the victims in a photograph of a political atrocity. The installation’s conflation of female body and the imprisoning glass coffin that is the lot of women in fairy tales was an extension of the conceit of suffering written on the body, be it in the form of scars, bruises or body fluids, that has long informed Cadieux’s photographic work.

The obvious equation of the transparent surface of the glass case with human skin and the almost empty interior with inner human space, whether physical or psychological, became more disconcerting the longer one stayed with the piece, because it is only the evidence of pain and nothing else that issues from this metaphorical feminine body/coffin. This unidimensionality of emotion becomes even more apparent when one compares Broken Memory to works like the “cells” of Louise Bourgeois, which I happened to see a couple of days prior to Cadieux’s piece. Bourgeois’ room-like structures might also be seen to signify feminine psychic and somatic reality, and their dense arrangements of found and sculptured objects are often tropes of misery and decay. But Bourgeois’ allusions to suffering in this series are embedded in visual configurations that read like webs of conflicting feeling and experience, not all of which is negative. Cadieux’s piece, on the other hand, proposes a body from which everything has been eviscerated save a highly responsive nervous system that is being subjected to punishment ad infinitum.

Added to this is the realization that the body here is being likened not only to a coffin, but to an electrical apparatus, a conversion which in psychoanalysis signals a tragic armouring of the self against feeling that might otherwise prove intolerable. While Cadieux’s photographs and multimedia pieces regularly show human beings who appear to be in torment, the temporality of the photographic moment allows one to believe that in another instant these same subjects might cease to weep, and their bruises begin to heal. The viewer knows that the cries emitting from Broken Memory will not ever turn to laughter. Nor does the erotic component that brought a leavening ambiguity to works such as La Felure, au choeur des corps (the juxta-position of a photograph of a kiss with two others of scars) assert itself in any obvious way here at all.

As with several of Cadieux’s previous works, like the 1989 photographic triptych featuring images of a woman who is either in pain or in the throes of pleasure, together with a close-up of her mouth, called Hear Me with Your Eyes, it is tempting to try to interpret this installation in relation to discourse surrounding the patriarchal suppression of feminine suffering and “voice.” In the past, the fact that the anguish alluded to in Cadieux’s photographic constructions was never explicitly shown to signify more than the personal misery of the individual women portrayed meant that a feminist reading of her work could be only tentative, at best. The shift from the photographic medium to the sculptural, however, has also entailed a move on the part of the artist away from the depiction of what may be only particular feminine situations to the representation of an archetypal feminine position within culture.

A pamphlet accompanying the installation quotes Cadieux as saying that the work was inspired by the poem “Words to be Sung,” written by the seventeenth-century Mexican writer Sister Juana Ines de la Cruz. The poem states that one must let “sorrow emerge in full clamour.” Of her suffering, the nun writes that “It is greater than I, my affliction; and this being so, it is meet/that I should not try to subdue it, but allow it to conquer me.” The reference to this poem seems to confirm that the ambiguity present in much of Cadieux’s work has not only to do with the relationship of (feminine) sensual and amourous pleasure to pain, but of both these states to something that is akin to a kind of mystical rapture. Luce Irigaray writes that mystical discourse is the “only place in Western history where woman speaks and acts in … a public way.” Broken Memory underlines the fact that the intimate experience Cadieux’s work consistently transposes to a scale which is both public and monumental, is also always expressed in an iconography of religious agony and transcendence. 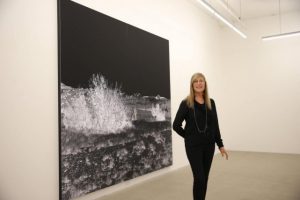 With Broken Memory, Cadieux’s change in direction from photographic to three-dimensional form provides not only a dramatic insight into certain dimensions of her past production, but as well reveals an opening out of expressive possibilities.