Vern Hume and Don Stein’s CD-ROM installation, Undiscovery, is a multimedia database that deals with the discovery and subsequent colonization of Banff, and explores the park area in the context of changing perceptions of space, movement and identity brought about by advances in digital technology and tendencies toward globalization. Rather than drawing borders, this experience involves an active trajectory between places, identities and social formations.

Undiscovery embodies a peculiarly twentieth-century preoccupation with art and revolution playing themselves out in a realm of amusements and commodities. Constructed like an interactive video arcade game, the software invites “cyber-explorers” to navigate their own way through a multimedia database — a virtual geography of cultural and historical hypertexts. The database utilizes archival photographs, promotional films, video clips, original poetry, printed texts and a pastiche of sounds to build digitized mediascapes of the Banff area against the backdrop of localism, migration and colonization. The information hierarchy of the CD-ROM is intentionally shallow to allow for easy access by multiple, untrained users over short periods of time. The associative links, in and between the video, audio and print texts, form pathways which allow for various, unique interpretations of the archival material. 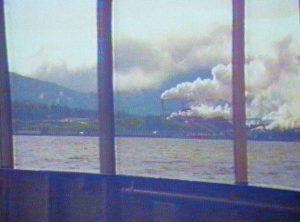 This electronic kiosk prompts the user with five buttons correlated to five thematic regions of the database: explorers and conquerors (colonization); the garden (wildlife); tourist’s gaze (tourism); machine in the garden (industrialization); and constructing histories (artifacts and museums). By navigating the digitized information, electronic mariners are given the impression that they are organizing a personal version of the data, a distinct identity. Although users are offered choices, the fact is that no real choices exist, they discover what is already there.

The artists’ use of consumer electronics complicates both the aesthetics and politics of the CD-ROM by implicating the artist as consumer, and the consumer as artist. The counter-cultural notion embodied in the modernist view that life is a work of art is thus accorded wider currency. With this expansion of the role of art, and with the resulting disintegration of artistic cliques, a blurring of genres occurs which reveals a tendency towards the deconstruction of symbolic hierarchies. This aestheticization of reality foregrounds the importance of style, which is also encouraged by capitalism’s market dynamic, with its constant search for new fashions, fads, sensations and experiences. Therefore, within consumer ideology there is the tendency to push culture towards the centre of social life, albeit a fragmented and continually reprocessed culture.

This fragmented condition, like the incorporation of various texts in Undiscovery, reflects a stylistic promiscuity which undermines the basis of the high/low cultural split. Generally, databases stress the leveling of symbolic hierarchies and an impulse towards cultural declassification. It could be argued that these circumstances represent a movement beyond individualism, to the “new aesthetic paradigm” that Marshall McLuhan prophesied. Digital technology, with its ability to access and animate, augment and amalgamate any number of individual components from our vast cultural storehouse of images, is instrumental in articulating this postmodern reflection on contemporary art production. This kind of manipulation, especially with video, where technological innovations helps mask a return to older sets of ideas, suggests a kind of kindred spirit with other art movements like Surrealism, Pop Art and Dada. 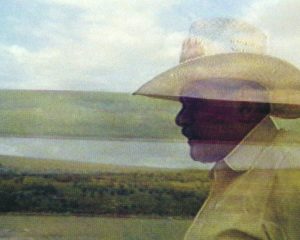 In Canada, technologies have played a central role in the historical development and articulation of the nation-state. The European cultures that invaded and settled here did so by turning the Atlantic Ocean into an abstract space of movement, migration and trade. In fact, the construction of Canadian identity cannot be properly understood without reference to the historical role of communication technologies. Telecommunications increasingly shape our culture and the subjects within that culture. The result is an emergence of social formations and power relations that do not necessarily fit within the prevailing Fordist/Keynesian model. These socio-political transformations are reflected in the dwindling power of trade unions, changes in consumption patterns, deregulation, the downsizing of government, and the revitalizing of market powers.

As Undiscovery points out, a new regime has taken hold of the by-ways and tributaries of the Canadian heartland — a regime of power and accumulation not based on boats or trains but satellites and data flows. Unanchored from physical space and cast into what Manuel Castells calls the space of flows, Undiscovery’s digital images and texts become ambiguous, revealing a poetic that the surrealists could only imagine but that the electric current renders concrete. The passage from modernity to postmodernity involves the passage from one form of abstraction to another — from social spaces defined by the production flows of water and rail networks to the more abstract electronic spaces of McLuhan’s “global village.”

While looking through the lens of locale, in this instance the town of Banff, it becomes possible for the artists to address crucial questions concerning the relationship between political and cultural aspects of these transformation. Hume and Stein negotiate between tradition, institutionalized aesthetic discourses, and organic emergent forms of social communication. The media arts are an experimental laboratory, not so much for new technologies as for new social relations of communication. In this instance the convergence of the critical tradition with new technology seems to be a dialectic with potential to raise both to a new level of cultural and political salience.

Whether home is imagined as the nation-state, region or one’s immediate surroundings, it is drenched in the sentiment of wholeness, unity and integrity. It is about a notion of community centred on shared traditions and memories, and inextricably interlinked with texts and the patterns and flows of modern communications. The memory banks of our times are being constructed out of the materials produced by the media arts and cultural industries, In fact, the role of these consciousness industries is the construction of contemporary memories.

For Hume and Stein the new culture of commercial enterprise enlists culture to manufacture differentiated urban or local identities. These identities are centred around the creation of an image — a fabrication — achieved through the recuperation of “history” (real, imagined or simply recreated as pastiche) using archival material and of “community” (again, real, imagined or simply packaged for sale by producers) in a local context. But localism can be a more positive force in its attempt to elaborate a creative local response to the invasive influence of global capital. If localities are increasingly becoming nodes in emerging global networks, then local consciousness and action may offer new possibilities for more efficacious, and selfconscious, participation in world affairs.

It is a question of recognizing the role of the stories we tell ourselves about our past in constructing our identities in the present. As Undiscovery points out, one key issue concerns the power of mass media technologies to involve people in a common sense of identity, its capacity to provide integration and meaning as it constructs and conscripts public images and interpretations of the past, in other words, its ability to re-enchant a disenchanted everyday life. With Undiscovery, Hume and Stein raise new questions about the interrelation of spaces of accumulation, arenas of cultural consumption and cultural identity.